Jennifer Steven has worked at dk Engineering for nearly five years as a Land Surveyor, and she currently holds the distinguished title of Professional Land Surveyor (PLS). She is responsible for keeping the firm’s field crews busy with work, preparing contracts and estimates, resolving boundary/easement mapping, preparing exhibits, preparing plat and legal descriptions, and ALTA surveys. She also works with a small survey team that produces mapping, drone surveys, and various surveys to supporting the needs of dk’s engineers and others.

A student of Geomatics and graduate of Oregon Institute of Technology in Klamath Falls, Oregon, and having previously worked at PG&E, Jennifer’s work at dk involves a deep understanding of software, modern techniques, and Geographical Information Systems (GIS).  As a licensed PLS, she had to pass 2 exams—both a national exam and a state-specific (California) exam, which had a 10-15% pass rate that year– quite an accomplishment while also caring for her newborn daughter the same year.

We are asking Jennifer some questions about her passion for engineering and where she draws inspiration.

1. What is your first memory of being interested in the field of engineering?

My mom said engineers had great paychecks and job stability, and that initially piqued my interest. I really became interested in Land Surveying as a profession when I learned what my stepdad did. He retired as the County Surveyor of Douglas County in Oregon. Often he would bring home cool rocks, interesting stories, and poison oak from working in the field. I wanted all that—except the poison oak rash. He told me about having to solve a survey of an entire town: It sounded challenging and interesting!

2. What inspired you to study engineering?

I completed community college and was ready to decide “what I wanted to be when I grow up.” My mom and I were looking at college pamphlets and materials from a career field. The most interesting was something weird called “Geomatics” and it sounded awesome: the ability to travel, spend time outdoors, mathematics, and a little bit of artistic mind to help solve problems. We didn’t really figure out that Geomatics was Land Surveying until college orientation.

3. What do you love most about the field of engineering?

Most days I’m doing something new. Yesterday I was creating an exhibit for a lawyer to share lease areas for a wind farm, tomorrow I’m creating a 3-D world of a project to supplement some drone videos for a presentation, and later in the week I’m preparing a Parcel Map Waiver for one of our municipality clients to help clear up some boundary issues. All are unique problems I’m suited to solve.

4. What skills do you believe women bring to engineering?

Like any field that benefits from diversity, surveying is a male dominated field. Women bring one more aspect of diversity, just the same as having any other minority. It helps problem solving, coming up with different solutions, creativity, and a better work environment. I find a mixed group reduces cliques and everyone works toward solving the common work problem.

5. What woman inspires you?

My Mom inspires me. She was one of five children that didn’t grow up with a lot of opportunities. When she became a single mother when I was eight years old, she educated herself, got a PC installed in her home (in the 80’s) and became a stay at home/working mother whose profession became typing up doctor’s notes as a medical transcriptionist. Without her resourcefulness and strong willingness, I wouldn’t be the same person.

6. What’s your favorite part about your job at dk Engineering?

I love how close our team is. We often eat lunch together and have great banter. I feel that working at dk is more than a job, it’s a community of friends working toward a common goal; to provide excellent customer service, superior product and a balanced work-life.

7. What is your greatest satisfaction on the job … and in life?

My greatest satisfaction professionally is when I get to record a map into public records. We don’t often get to file something of public record that will last forever, other than a birth certificate, mortgage and death certificate. As a surveyor, I get to file Records of Surveys, Corner Records, and Subdivision Maps: all of which are on record forever. I enjoy reading old cursive documents from the Bureau of Land Management about the original survey of the United States and wonder what sort of person and crew performed the work. What was the weather like, what was around there. So much of our history is tied to surveying without the general public knowing it – until they need to build a fence.

My greatest satisfaction in life is seeing my daughter grow and learn. I feel an enormous swelling of pride seeing her learn and problem solve. She is an incredibly smart, courageous, independent and loving daughter; I couldn’t have asked for more. 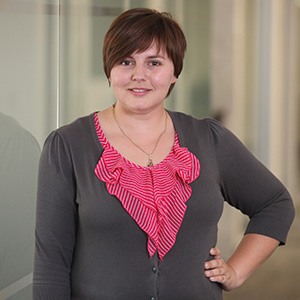